Consisting of nine islands, the Azores are divided into three groups: the eastern (Sao Miguel and Santa Maria islands), the central (Terceira, Graciosa, Sao Jorge, Pico and Faial islands), and the western (Flores and Corvo islands). Apart from international airports of Santa Maria, Ponta Delgada and Angra do Heroismo, there are flights to the islands (operated by the regional airline TAP Air Portugal) and ferry boats between the islands.

Even the blase visitor will be touched by the sapphire blue and emerald green lakes, fertile prairies, volcanic cones and craters, colorful hydrangeas and azaleas, 15th century churches, and majestic manor houses. This legendary land, consisting of nine poetically-named islands, enjoys year-round mild temperatures (between 14°C and 22°C–57°F and 71°F) and is a peaceful shelter with a population of 250000 inhabitants, for whom the words “stress” and “pollution” are unheard.

There are many stories to tell of the archipelago’s beauty, of fishermen or shepherds, but among them there is one which was told by a holidaymaker. As a foreign couple was silently looking at the Caldeira das Sete Cidades when they were interrupted by their six-year-old son, who asked them: “Is this God’s home?” 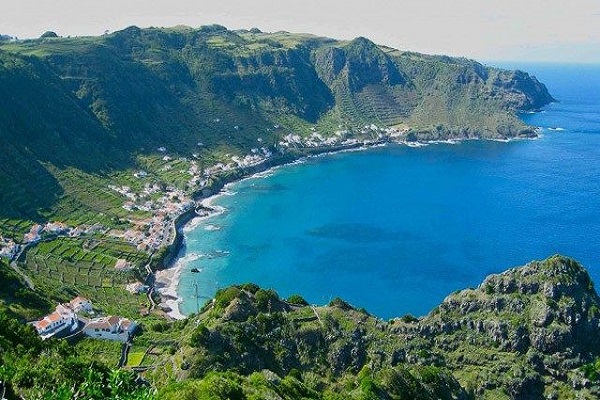 The largest of all. In Ponta Delgada, the capital, the famous 18th century portals open up to a number of monuments that are worth visiting, most of them built between the 16th and the 18th century: Carlos Machado Museum and churches of Sao Sebastiao, Sao Pedro, Sao Jose, Colegio and Nossa Senhora da Conceicao; convent and chapel of Nossa Senhora da Esperanca and Santa Ana Chapel. Palaces: Fonte Bela and Santa Ana; Conceicao and Santa Catarina; Casa de Carlos Bicudo and the Pacos do Concelho. Other places to visit: Caldeira das Sete Cidades (green and blue lakes); Lagoa do Fogo; Ribeira Grande; Vale das Furnas (spas and hot mineral pools) and Vila Franca do Campo.

The historic centre of its capital, Angra do Heroismo, has been classified in UNESCO’s International Heritage list. Special reference to the forts of Sao Sebastiao and Sao Joao Baptista (16th-17th-centuries); the palaces of the Bettencourts (Baroque) and of the Capitaes-Generais; the Cathedral, with its silver altar front and treasure; the churches of Colegio dos Jesuitas, Sao Goncalo and Nossa Senhora da Conceicao (17th-century); the churches of Misericordia and Nossa Senhora da Guia (18th-century, the latter encloses the Angra Museum). Other points of interest: Praia da Vitoria, Santa Barbara, Sao Sebastiao and Vila Nova. 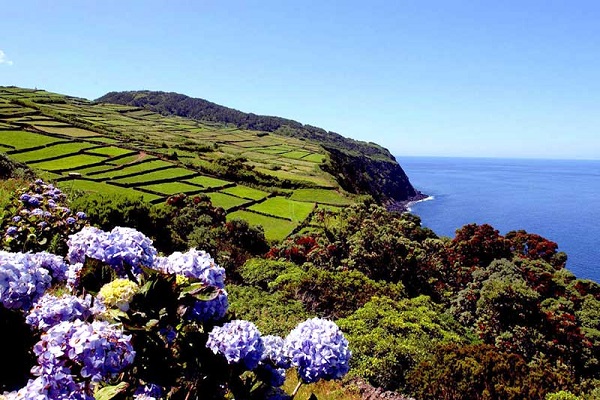 In Santa Cruz da Graciosa you will find ancient streets and manor-houses, a beautiful mother-church (16th-18th centuries), Santo Cristo Church (16th century), Cruz da Barra (Manueline) and Ethnographic House. In the Furna do Enxofre, dazzling sights and a vaulted cave over an underground lake (between 11am and 2pm the sunlight filters in). You must also visit Guadalupe and its Baroque church, Luz and Praia (typical windmills). 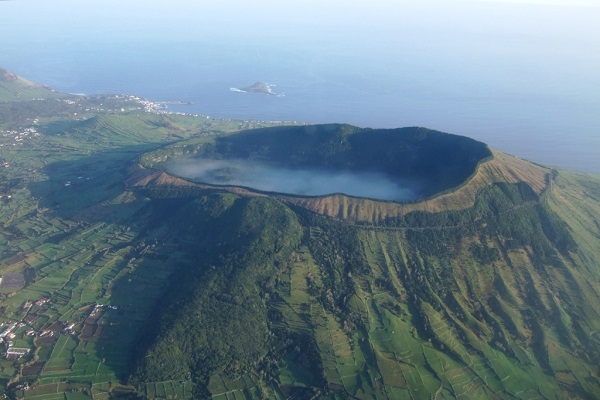 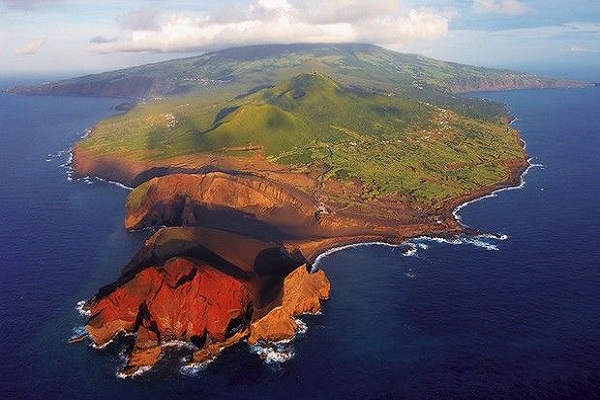 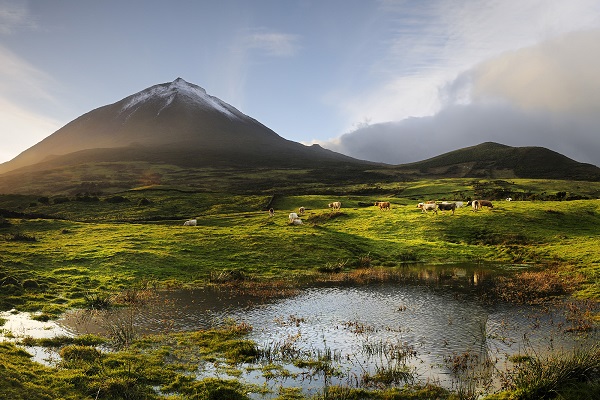 Velas, with its fishing port, is the main town. One can admire its manor houses, the churches of Sao Jorge (17th century), and Nossa Senhora da Conceicao, Town Hall (Azorian Baroque) and 18th century walls. Do not miss Calheta, Manadas, Ribeira Seca, Topo and Urzelina. 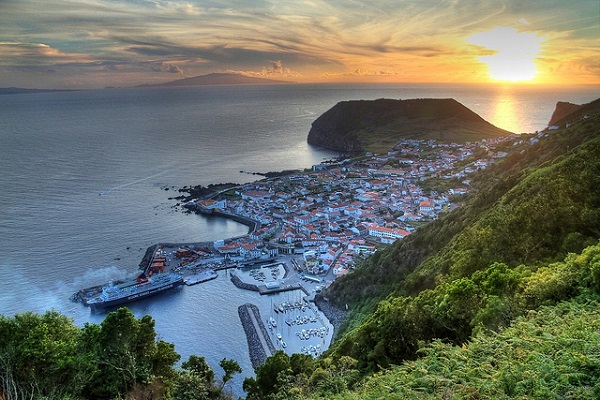 In Santa Cruz, you will find manors, the churches of Sao Boaventura (Baroque) and Nossa Senhora da Conceicao (19th century) and the Ethnographic Museum. Trips to Ribeira Grande Waterfall, to the Gruta dos Enxareus (by boat) and to Lagoas (seven lakes surrounded by flowers). 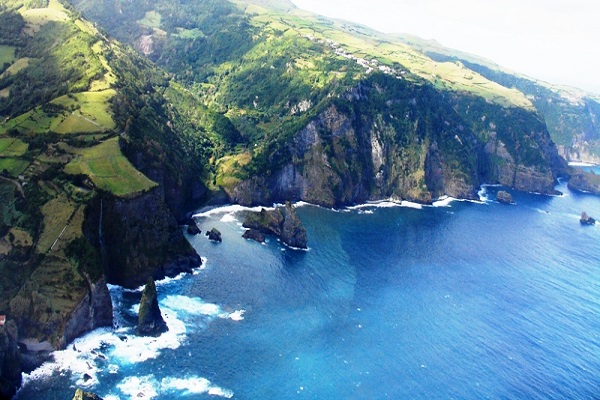 The smallest of all and a peaceful sanctuary. In Vila Nova do Corvo, narrow cobblestone streets and the Church of Nossa Senhora dos Milagres. In Caldeirao (enormous volcanic crater), there are two lakes with nine small islands, just like the archipelago. 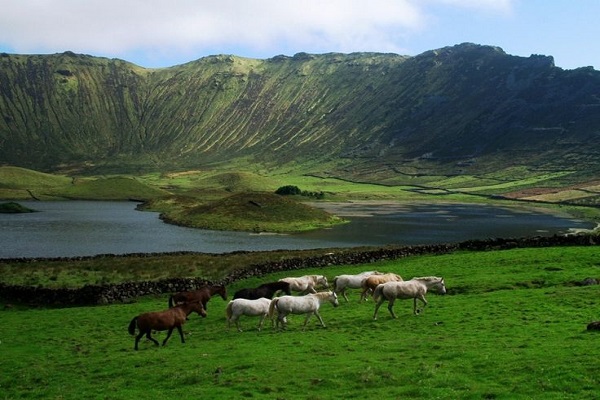