The main island of the Azores, São Miguel still maintains a unique charm where life is polite and unhurried. It’s a great island for a first visit with easy flight connections, a wealth of things to see and activities to do, and some of the Azores’ most spectacular volcanic scenery.

From quiet fishing villages to remote crater lakes to boiling pools, this island has it all.

Sao Miguel is now the most important island, and most visitors to the Azores make landfall at its main town, Ponta Delgada. By Azorean standards it is a bustling conurbation lacking the calm that is the islands' most appealing feature, but there are some notable attractions.

The three arches in the main square, Praca Gonzalo Velha Cabral, were part of a gate through the original city walls. In front of the square, a road continues along the harbourfront to the imposing fortress of Sao Bras; behind that is an attractive square, Praca 5 de Outubro, whose highlight is the alluring Chapel of Nossa Senhora da Esperanca. In contrast with the ornate gilding around the altar, its walls are covered with blue and white tiles depicting Biblical scenes. From the square, follow the narrow street that runs parallel with the harbour road, lined with two-storey, balconied houses and towers providing look-out points. 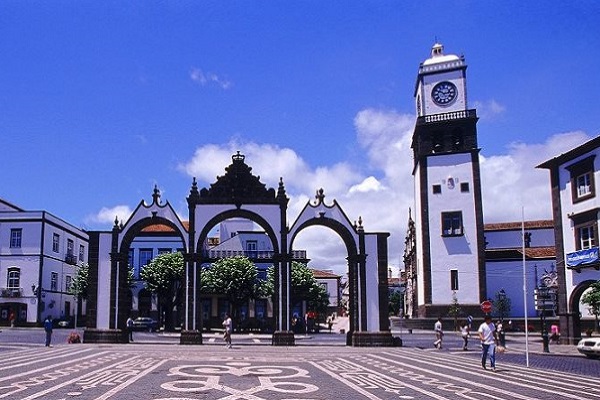 The main attractions of Sao Miguel lie beyond the town. Its scenic strong point is Sete Cidades – a name that translates from the Portuguese as "Seven Cities", which is curious given it is a volcanic caldera. Unlike most such craters, this one has a village near the bottom, plus a pair of lakes with a legend. The story broadly goes that a beautiful princess fell in love with a shepherd, but they were forbidden by her father from marrying; he did, though, permit them to meet one final time. Her tears ran blue, to form the larger lake; his were green, and created the smaller.

Visit São Miguel's three stunning crater lakes – Sete Cidades, Furnas and Lagoa do Fogo. Sete Cidades, a green, fairy-tale crater with its twin lakes is almost ten miles in circumference while Lagoa do Fogo (Fire Lake) is the most remote of the lakes set within an imposing mountain range. 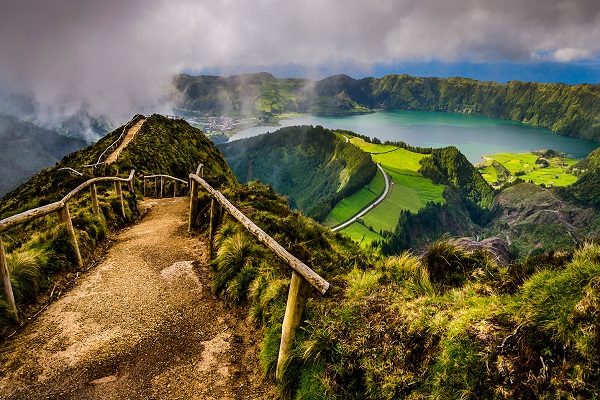 Through the city gates of the bustling capital, Ponta Delgada, lies a traditional centre home to some beautiful examples of Portuguese architecture dating back to the 17th century. A whole day can easily be spent here, visiting the museums and churches and sampling the local delicacies of pineapple, cheeses, wines, fresh ﬁsh and liqueurs. The valley of Furnas in the eastern highlands is a true paradise; with its beautiful ﬂower-lined lake, botanical garden and Caldeiras (hot springs) it is guaranteed to make your stay a truly memorable one.