Over the years other influences added to the present richness and refinement of the island's gastronomy. These influences ranged from the presence of Spanish troops for nearly 80 years, the refugees of absolutism and the Englishmen connected with the "orange trade", to the convent recipes for sweets and liqueurs. The meat specialties called Holy Ghost soups, alcatra and cozido, as well as the locally made wine known as "vinho de cheiro", are connected with the festivities that animate the whole island in the summer. Having a place in the festivals is also "massa sovada" (sweet bread), baked into biscuits of various shapes including some with the forms of animals and humans. Other delicious dishes are "caldeirada" (fish stew) with apples, sarapatel (haggis) and morcela (a kind of blood sausage) as well as the various traditional recipes for octopus, rabbit (with a special sauce called molho de vilão), crabs, goose barnacles and limpets.

Cooking in Terceira reaches perfection in the form of the over two hundred recipes for sweets. Most of these sweet-meats, such as donas-amelias and coscoroes, are made in accordance with convent traditions. Fresh cheeses made from goat's milk and the “Ilha” cheese made from cow's milk put a fine finish to any meal. As far as wine, Porto Martins and Pesqueiro produce a "verdelho" while the wine of Biscoitos enjoys great local fame. The local liquor “Angelica” is also a Terceira native.

Sugar paste, mixed with water and a drop of vinegar, is transformed by the skilled hands of women confectioners into flowers, doves, chickens, swans, rabbits and calves - a varied, sweet and fantastic world of sugar. These sweet-meats are associated with the Festivals of the Holy Ghost and those of the patron saints, and are often used as thanks for miracles obtained. In the latter case the confection takes the shape of the part of the human body that has been cured (a breast, arm, leg, etc.). The sweet-meats are long-lasting and therefore, when not consumed by visitors with a sweet tooth, make an original souvenir of Terceira.

The mild climate of the Azores and its position as a port of call from the 15th to the 17th centuries enabled Terceira to add to the traditional European crops of the time new plants brought from other continents. This led to the fact that early in the 16th century, before it was introduced in Europe, the sweet potato was being planted in Terceira, whence it spread to the other islands. For the same reasons maize, yams and potatoes have been part of the diet of Azoreans from those early times. 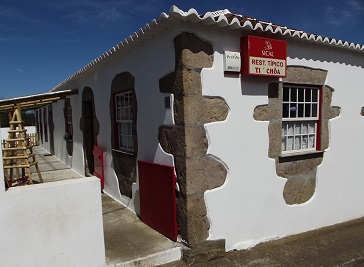 While the menu is certainly rich and meat-centric, it's a charming spot and a lunch there guarantees no need for another meal until the next day!
Read More